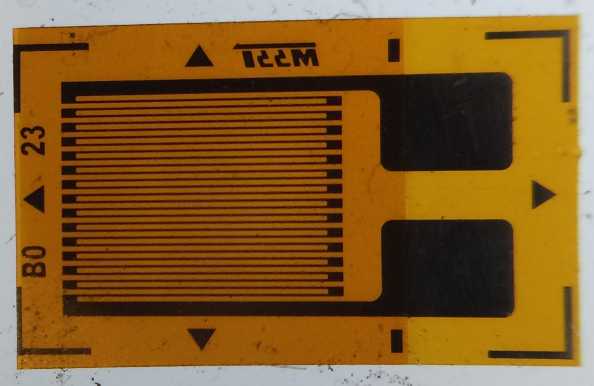 The measuring principle is based on the resistance change of the strain gauges due to elongation.

But how does a strain gauge work? To understand the principle of operation, it must first be made clear that a strain gauge is basically nothing more than a simple resistor. Like any other resistor, a strain gage is defined in its resistance by the length and width of the trace. Where:

If the strain gauge is mechanically loaded by tension, pressure, bending or torsion, then its electrical resistance changes. This becomes clear in the following picture.
When stretched, the conductor elongates while its cross-sectional area becomes smaller. This leads to an increase of the resistance value of the strain gauge. In a wide stretching range, the resistance value is proportional to the longitudinal strain of the conductor. The cross-sectional strain does not affect this area.

Another cause for the change in the resistance value during deformation is the effect of the piezoresistive effect: A deformation leads to a change in the mobility of the free charge carriers. In the case of elongation of the conductor, there is a reduction in free mobility, which causes an increased resistance value. When compressed, it is exactly the opposite. The piezoresistive effect is particularly noticeable in strain gauges in which the conductor track consists of semiconductor material.

After it has been determined that the electrical resistance of the strain gage changes when stretched, the question arises as to how this fact can be used to measure force. The answer is as follows: The resistor or the strain gauge are connected to a measuring body in a force-fitting manner. If a force acts on the measuring body, this leads to stretching of the measuring body, which also causes an expansion and thus a change in resistance in the strain gauge due to the frictional connection. The change in resistance is then measured and is a measure of the force acting on the measuring body. However, this only applies to forces that cause expansions in the proportional range (Hooke’s straight line) of the stress-strain curve. Only in this area there is a proportionality between strain and mechanical stress. The stress-strain curve is different for each measuring body.